With a surface of about 450 acres

It is being the second largest park in the city after Villa Doria Pamphili. It is found in the north-eastern part of Rome. The highest prominence of it is the Monte Antenne with an altitude of 67 metres that is around 220 feet, which is an ancient archaeological site. If you want to spend a precious day surrounded by nature, may be lying under the trees with chirping of birds and squirrels bouncing from branch to branch have to go absolutely to Villa Ada, with its 180 hectares. In the area of Villa Ada, there are also the interesting catacombs Trasone and Priscilla that are also famous.

It became the property of the princes Pallavicini who transformed it into a "landscape garden", by creating geometric paths and small buildings (such as the Temple of Flora, ilBelvedere and the Cafehaus), to which the ground dislivellato provided backgrounds and views that are already romantic. The wooden expansions was owned by the Italian royal House of Savoy in the latter half of the 19th century; it contained the royal residence from 1872 to 1878. In 1878, the area came under the control of Count Tellfner of Switzerland, who named it in the honour of his wife named Ada. The royal family regained the control of land by 1904 but did not change its name. They retained control of that area until 1946.

Now this villa houses the Embassy and the Consulate of the Arab Republic in Egypt and its wonderful park is available to all. A real lung of Rome where one can spend quiet moments away from traffic and smog parks richest of the capital regarding the fauna and the environment: cypresses, pines, palmettos but also a skating rink and gymnastic routes make it as one of the most popular villas and frequently used by the Romans. Inside there are areas for children to play, an area for our canine friends, trails for walks and even a riding school with an opportunity to rent ponies, all with a wonderful scene between trees and lovely ponds where a calm swim of a large group of turtles can be seen!.

To liven up the evenings in Rome. One can come out at dawn and sunset, no real opening and closing, depending on the season. The public portion of the park is much larger than the private area. It contains a spurious lake and many trees, including stone pines, holly oaks, laurels and a very rare dawn redwoods that were imported from Tibet in 1940. Entrance to the park is free. Visitors may rent dugouts, bicycles or riding horses. A large swimming pool is designed for the visitros. Since 1994, during the summer, this park hosts the world-music festival and the "Roma in contra il mondo" means Rome meets the world, a festival against racism, war and the death penalty.

Places to visit near Villa Ada 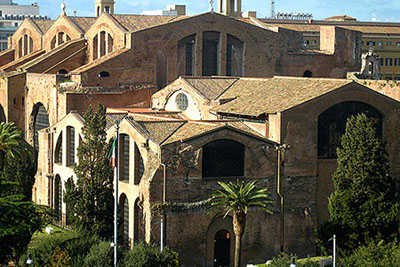